Skip to Main Content Skip to Navigation Skip to Side bar


September 7, 2021 – Despite not qualifying for the playoff round, Team Canada’s women’s national goalball team is using its experience at the Tokyo 2020 Paralympic Games as something to build on for the future.

“While the results might not have gone our way, there are still a lot of positives that we will be able to take moving forward,” said James Thompson, High Performance Director, Canadian Blind Sports Association. “Despite trailing in many games our athletes did not give up, which is definitely a good sign for the future.” 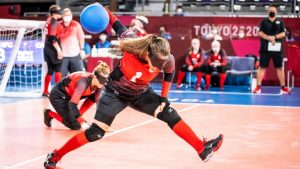 The Canadian women completed preliminary-round play with a 1-3 record, finishing fifth in group C and not qualifying for the quarterfinals. Overall, the team had 12 goals for and 15 against in the tournament.

Thompson also pointed to the play of Paralympic rookies Brie Baldock, Maryam Salehizadeh and Emma Reinke as a positive sign for the future.

“Our younger players gained some really valuable experience in Tokyo, and we can’t wait to see what they do in the years to come,” added Thompson.
Reinke, participating in her first Paralympic games, was dominant at times in the tournament. In a win over Israel she scored four goals and was a key contributor to Canada’s defensive system. She was Canada’s top scorer in Tokyo.
The Canadian women were late qualifiers for the tournament, despite winning a Bronze medal at the 2019 Parapan American games in Lima Peru.